In the Poll Dorset line-up, all 50 rams were sold to a top of $3250, averaging $2250.
Jackson Farming stud principals David and Carol Jackson and Ross and Lydia Jackson said they were very pleased with the sale result for both breeds, particularly the complete clearance of rams and ewes.
The auction opened with 12 'top of the drop' 2020 Border Leicester ewes who received spirited bidding both on-property and through AuctionsPlus.

The top-priced $12,000 ram, Lot 17, was purchased by Stuart and Anja Croft, Dalarossie Pastoral, Drumborg, first-time buyers to the Jackson Farming stud. The Croft family also own and lease property at Nigretta, Pigeon Ponds and Ivanhoe in NSW.

Mr Croft said the ram, who is sired by Jackson Wild Oats 6/18, would be used in a special flock of 50 Border Leicester ewes to produce rams for their own breeding program.

"His progeny will go over about 4500 Corriedale and Corriedale/Merino-cross ewes with the ewe lamb portion sold into the replacement breeder market," Mr Croft said.

"He is a big, robust, very true to type Border Leicester ram, I thought he was the best-shaped ram in the sale."

The second top price of $7500 was paid by the Morton stud, Lucindale, SA, on AuctionsPlus, while Andrew McFarlane, Branxholme, paid $6500 for a stud ram.

Also operating at the top end of the draft was Coryule Pastoral Co, Willowvale, taking home four rams to $4500, and the Burger family, Glenthompson, averaged $3187 for four rams.

The Poll Dorset portion of the sale also got off to a cracking start with a top of $3250 paid twice by Fleur Hillman, through Elders Ballarat. Ms Hillman purchased a further nine rams, averaging $2568.
Volume buyer in the Poll Dorsets was Pat and Sarah Millear, Willaura, taking 16 rams for an average of $2375, and Barton Station, Moyston, also bought 16 rams. 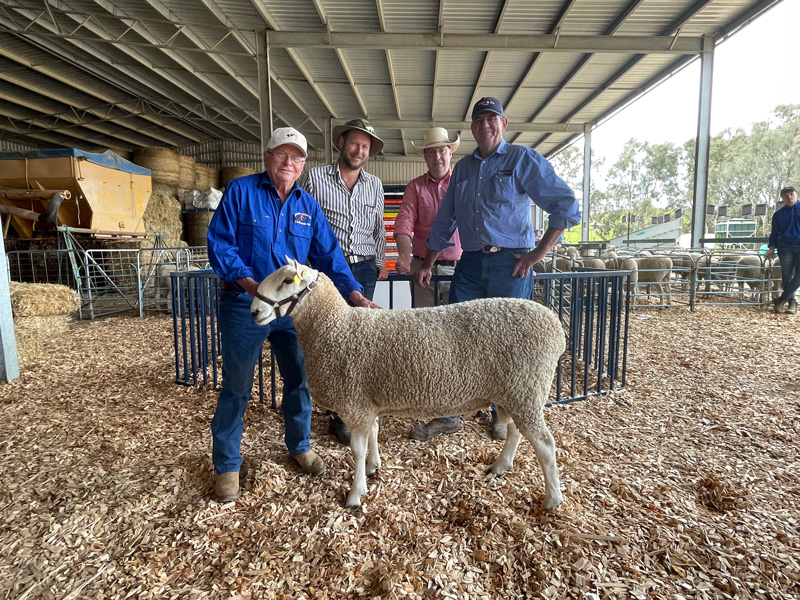