The Jackson family celebrated their 21st annual on-property ram sale in style, achieving a complete clearance and a new record average of $2647 for the Border Leicester offering.

Strong support from buyers throughout Victoria, SA and NSW underpinned the success of the sale, with 72 bidders registered on-property at Moyston and a further 77 buyers registered online through AuctionsPlus.

Jackson Farming stud principals David and Carol Jackson and Ross and Lydia Jackson were thrilled with the result.

"It was the type of sale that you really only dream about," Mr Jackson said.

"We would like to thank all the successful buyers and underbidders, livestock agents and everyone that helped make the sale such a success."

The auction opened with 12 'top of the drop' 2019 stud Border Leicester ewes who received spirited bidding both on-property and through AuctionsPlus.

The six specially selected stud rams attracted the attention of breeders with Chris Hewitt, Hewitt Border Leicester stud, Warracknabeal, paying the top price on the day of $7250 for Lot 16, Jackson 103/2019.

Sired by Gleneith Wesley, the twin-born ram featured a Border Leicester Cross index of $129.8 and a high Maternal index of $144.4, making him eligible as a SuperBorder ram.

Mr Hewitt, who is also a member of the SuperBorder group, said the ram would be put to use in his own stud, which currently comprises 370 ewes.

"I liked the ram's size, wool quality and performance figures, he is in the top 10 per cent for post weaning weight," Mr Hewitt said.

Solid bidding from repeat purchasers continued for the line-up of high indexing Border Leicester flock rams. Buying at the top end of the sale draft was Coryule Pastoral Co, Willowvale, who took home four rams, paying to a top of $3000, while Todd Burger, Glenthompson, paid to $3900 for four rams and Stephen Millard, Millard Farms, Byaduk, paid to $4000 for two rams.

In the Poll Dorsets, Russell Phillips, Tatyoon, paid a top of $2100 for the final ram in the sale catalogue, which featured a terminal carcase production index of 125.5. Mr Phillips also secured a further three Poll Dorset rams.
Volume Poll Dorset buyer was Paraway Pastoral, Barton Station, Moyston, taking home eight rams for an average of $1675, while the Marshall family also operated in the Poll Dorset draft, picking up five rams averaging $1760, Nicholls Farming, Hamilton, secured five rams paying to $1900 and Glen Pretty, through Elders Ballarat, paid to $1900 for three rams.
Elders auctioneer Ross Milne was impressed with the depth and quality of the Jackson family's rams and said it was a great sale, well-supported by repeat buyers and new clients.

A further 44 Border Leicester and Poll Dorset rams were sold after the sale. 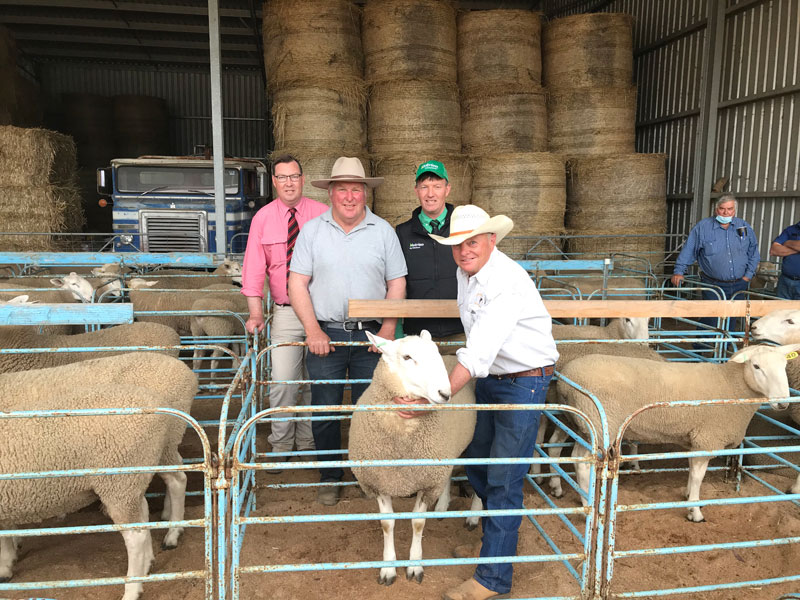