Strong competition from repeat buyers and new bidders underpinned the success of Jackson Livestock’s Border Leicester and Poll Dorset stud’s annual on-property sale at Moyston last Thursday, with a top price of $5500 for the Border Leicesters.

Bidding never slowed throughout the ram sale with 63 registered buyers attending from throughout Victoria, New South Wales and South Australia.

Mr Jackson was very pleased with the sale result for both breeds, particularly the increase in the average price and the complete clearance of rams.

“The great support from new buyers, repeat clients and agents, has made this sale our best ever,” Mr Jackson said.

In a quality line-up of high indexing Border Leicester sires, Heather Stoney, Ellingerrin Border Leicester stud, Modewarre, purchased the top priced ram, lot 3, for $5500, from the Two-Dot stud of Ross and Lydia Jackson. This young sire boasted a balanced set of figures, with a Maternal Index of $120.4. His grand sire was bred by Ellingerrin, and his dam was an award winning show ewe from the Two-Dot stud.

Mrs Stoney said she selected the ram because of his breeding, balance, and lovely fleece of wool.

The Banks family, Mt Mercer, paid $4,000 for another Top Gun sired ram, which had won the Maternal Lamb Production class at this year’s Hamilton Sheepvention.

Volume buyer on the day was Ben Cameron and Meera Dawson, Skipton, who bought 14 Border Leicester rams for an average of $1364, while M&G Coupland, Deniliquin, NSW, averaged $1367 for nine rams.

Volume buyer in the Poll Dorsets was V&R Dawson, Skipton, who bid to $1500 twice in securing their nine rams, while Woorabinda Pastoral Co also added to their selection, taking home four rams, paying to $1900 twice.

Elders auctioneer and stud stock manager Ross Milne, was impressed with the depth and quality of the Jackson family’s line-up of Border Leicester and Poll Dorset rams and believed this was reflected in the prices.

“It was a very strong, consistent sale from the start through to the finish, supported by regular buyers as well as new clients,” Mr Milne said. 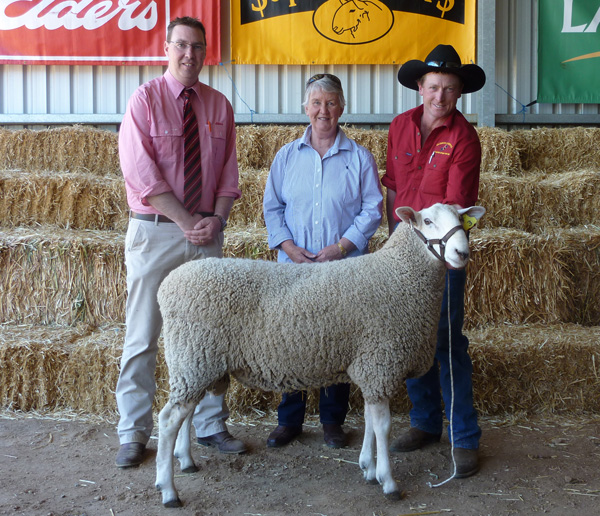